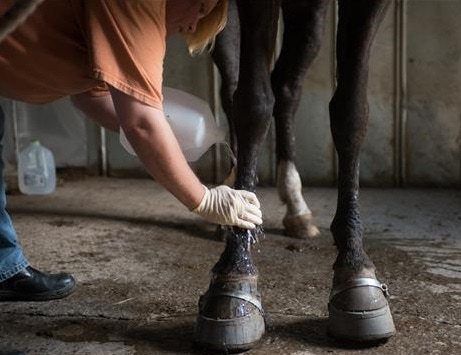 A Tennessee judge dismissed the felony charge of animal cruelty against Larry Wheelon after a communication break-down in the state’s case. Wheelon is the Tennessee Walking Horse trainer accused of soring horses after his stable was raided in April.
The state’s key witness, U.S. Department of Agriculture veterinarian Dr. Bart Sutherland was not permitted to testify Thursday, after he sat in the courtroom for 30 minutes during the preliminary hearing. Blount County General Sessions Court Judge Robert Headrick invoked the rule
requiring witnesses to remain outside the court, but Sutherland was still in transit from out of state at the time.
Sutherland is the veterinarian that assisted with the initial investigation. He was scheduled to testify regarding the test results for the horse Wheelon was charged with abusing. Without his testimony, the prosecution was unable to prove its case, which led to the dismissal of the aggravated abuse charge.
After the raid at Wheelon’s farm 19 horses were seized.
One of the horse’s owners likened the removal of the horses from Wheelon — to Hitler’s reign. “Justice was served,” said Eugene Condry to The Daily Times. “This reminds me of Nazi Germany … the way these horses were seized.”
We contacted Assistant District Attorney Ellen Berez to see if she plans to re-file the charge, but we did not receive a call back immediately.