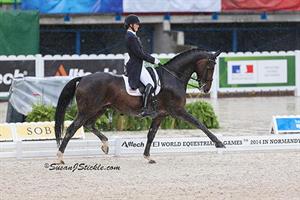 The first day of dressage competition at the 2014 Alltech FEI World Equestrian Games got underway Monday beneath rainy skies at the d’Ornano Stadium with the first half of competitors completing the FEI Grand Prix Test. Forty-nine combinations performed in front of the Ground Jury of Stephen Clarke, Elizabeth McMullen, Isabelle Judet, Susan Hoevenaars, Francis Verbeek, Dietrich Plewa, and Liselotte Fore. The United States got off to a strong start with solid performances from Adrienne Lyle and Tina Konyot.

The U.S. stands in fifth place in the team competition at the end of Monday after two horse rotations.

Lyle (Ketchum, Idaho) had to deal with some of the heaviest rain of the day as she headed down centerline during the afternoon session with Peggy Thomas’ Wizard. The 2012 London Olympic Games veterans produced an accurate and consistent test that was just marred by a mistake in the one-time changes to scoring 72.000% to finish the day in seventh place.

“I was thrilled with how he went. We played around a bit in the warm-up and splashed around a bit to make sure he was comfortable with it,” said Lyle of her warm-up that helped her achieve the Grand Prix score she was aiming for. “That was my goal to hit 72; so I was thrilled. When you’re on a team there’s always extra pressure so I’m really happy with our test today.”

The pair has been competing together for nearly nine years and their partnership showed as Wizard kept a level-head throughout the test to stay with Lyle every step of the way.

“He knows his job and now I can try to get half a point here and there,” said Lyle. “I can really trust him.”

Tina Konyot and Calecto V (Palm City, Fla.) was the first rider down centerline for the U.S. with her own Calecto V scoring 69.643%. The 2010 Alltech FEI World Equestrian Games and 2012 London Olympic Games veterans performed their trademark expressive test but a few bobbles, including in the one-time changes, kept them from breaking the 70% mark. Nonetheless Konyot was extremely pleased with the 16-year-old Danish Warmblood stallion.

“I’m very, very happy. I had a few mistakes that cost me some points but overall I’m very happy.”

The 2014 Alltech FEI World Equestrian Games are slated to be the final championship appearance for Calecto V to close out an impressive career for the stallion.

“He’s in the three-plus club; two world championships and one Olympic Games; very few horses have done that,” said Konyot proudly of her longtime partner. “He’s done so much for me.”

The pair finished the day in 17th place.

Germany leads the team competition at the halfway mark, with their combination of Kristina Sprehe and Desperados FRH producing the top score of the day after earning 78.814% just before the lunch break.

The U.S. will close out the team competition on Tuesday with Laura Graves and Verdades heading down centerline at 10:09am local time, with Steffen Peters anchoring the American effort on Legolas 92 at 3:45pm local time.

Enjoy this look behind the scenes with the Chez Phillip Show.