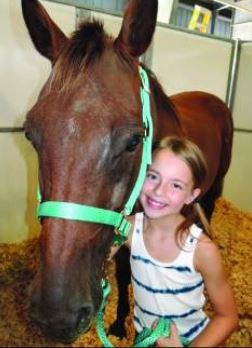 A photo of Olivia and Dixie Belle when they met previously.

Olivia Campbell stood with a sign fit for a celebrity. It read ‘I heart DB’.

She wasn’t at a concert or a sports stadium with cheering fans. The nine-year-old was at a Florida horse auction this week, where five formerly abused horses were sold at the Okeechobee Agri Civic-Center. Campbell was waiting to reconnect with an old friend named Dixie Belle. The pair met at the now-closed trail riding business of James “Bo” Sharpe who allegedly beat and starved his horses.

The 13-year-old bay mare was one of 11 horses seized from the Okeechobee resident in May. A judge ordered Sharpe’s five horses sold at auction to recoup the county’s expenses. The remaining six horses that were seized were returned to their owners.

A judge’s order to send formerly abused horses to an auction is often a death sentence for the animals. In this case, fifty people attended the sale. After a small bidding war to $400, Dixie Belle’s fate was sealed. The mare was purchased by Olivia Campbell’s mother. Campbell and the bay mare have 4-H in their future.

Private homes purchased two horses and two were purchased by horse rescue organizations. The county recouped a meager $1,000 from the sale. Sharpe is responsible for any remaining funds from the animals’ care, according to the judge’s order.

Sharpe was charged in May with eight felony and three misdemeanor counts of animal abuse. He is not allowed to have any horses in his care or possession during the case.

Sharpe remains out on bond.