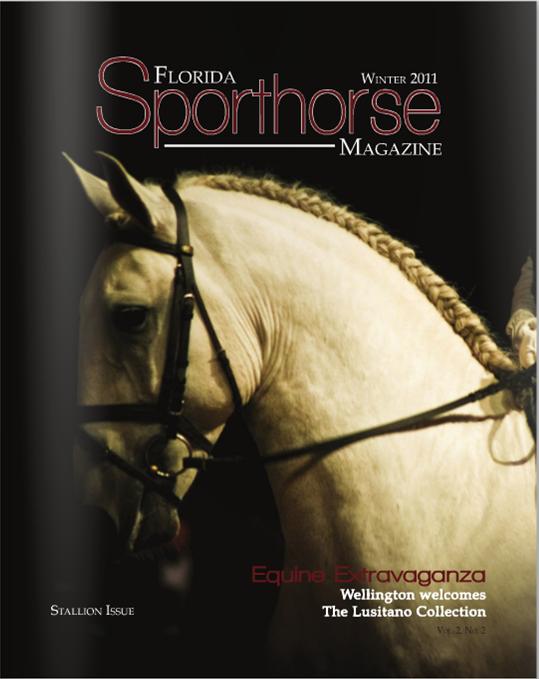 by Christie Gold
From corporate America to government to education, the buzzword of the decade is “accountability.”
As consumers demand more transparency in these areas, the internet has become a resource for rating services. Shopping mega giant Ebay asks buyers to rate their transactions; Angie’s list allows customers to rate a variety of professionals from plumbers to pediatricians; Ratemyprofessor.com allows college students a venue for feedback on their instructors.
So why not a rating service for the horse industry?
Rate My Horse PRO is a new company aimed at promoting quality services and encouraging ethical business practices through the rating of barns, trainers, farriers, and competitions.
“The site was initiated in 2008 by horse owners and professionals to improve industry ethics,” media relations director Debbie Hanson said.
Its cornerstone, a system where consumers can rate equine professionals, will go live in mid-February.
Hanson’s involvement with Rate My Horse PRO is personal as well as professional.
When her daughter outgrew her pony and the search for a new horse began, Hanson got a firsthand glimpse of the ugly side of an industry that she says has “no regulations to protect horse owners.”
Her daughter’s pony was sold after going on trial, but she was not informed of the sale—or the $18000 asking price. Her daughter’s trainers, who negotiated the sale, told her that the pony didn’t sell and that the farm would like to purchase her as a broodmare.
When Hanson discovered what had happened, she filed charges. The FBI became involved in what would be the first federal case of its time, and the story gained national media coverage.   As it turned out, the trainers had a string of victims across the country. Ultimately, they were arrested, served time in federal prison, and were suspended from USEF.
Once released from jail, however, they resumed their work in the horse industry and can petition to have their memberships in USEF reinstated later this year.
Hanson is not only interested in exposing industry bad guys.
“You hear horror stories but there are some great people out there, too, who do a good job, who have high standards,” she said.
She believes the site can combat the “bad rap” that the horse business gets.
Rate My Horse PRO’s rating system will enable consumers to rate equine professionals.
So that the site serves the community and is not just a forum for the venting of disgruntled customers, Rate My Horse PRO has built in several layers of credibility.
First, anyone who uses the site must pay a $5 verification fee. This security measure attaches a name to a credit card in order to ensure the fidelity of the rating system. The ratings, however, remain anonymous.
Hanson says that it takes time to rate a professional. The questions are specific and are divided into many categories.
These details serve another purpose: matching customers with barns, trainers or farriers.
A visitor to the site can put in certain preferences that will help generate a list of equine professionals within a certain radius of her zip code. Looking for a kid-friendly barn? A blacksmith that specializes in corrective shoeing? A trainer that travels Florida’s competitive winter circuit? Rate My Horse PRO will find appropriate matches.
Hanson says some horse people are skeptical about the rating system. “There are some critics. Anytime there is something new, it happens. People don’t like change,” she said.
Other professionals see the site as another potentially useful marketing tool of the digital age.
Dressage trainer and judge Sandra Beaulieu believes that the site will help her business. A resident of Maine, Beaulieu spends her winters in Tallahassee.
“I love things online,” she said. “In Central Maine, you don’t know where to find people. Not only does it help when I’m there, but when I’m in Tallahassee, people can find me here, too.”
In addition, Beaulieu believes the rating system will enable her to grow in her profession.
“I want to be able to look at my ratings and get an idea of what my weaknesses are, and what I should work on.”
As a clinician, Beaulieu says she often doesn’t get feedback. She feels the site can help set her apart from other instructors.
It’s this positive attitude that Hanson hopes will fuel the website’s popularity.
“It’s too easy to get stuck in the negative,” she said. “We want to educate the consumer and promote the positive. There is a standard phrase in the industry that ‘it’s always been done this way’; I’ve heard that more than I’ve heard ‘thumbs up, heels down.’ Just because it’s always been done this way doesn’t mean it’s right, that it’s morally correct.
The long-term goal is to help put the industry in a better light and promote those who do a good job.
“Lots of professionals are saying, ‘This is long overdue. I can’t wait.”

The original Fugly Horse of the Day writer, Cathy Atkinson blogged about Rate My Horse PRO soon after the site went live. Rate My Horse PRO received a positive review from the super popular and always controversial Fugly Horse of the Day.
She says, “I think it’s a great idea.” She continues, “It’s a serious consumer-feedback site that allows people to share what they know of horse professionals, whether the news is good or bad.” 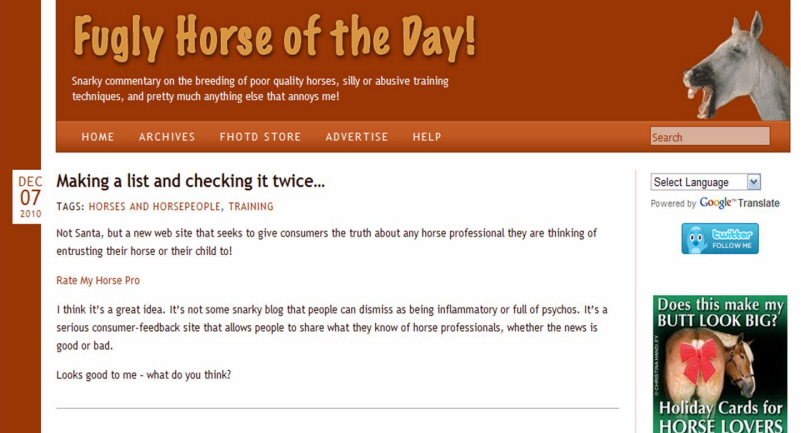 The shadows grow long as two men work out the final seedy details. A slide of the hand and the prized possession will be exported in the dark of the night. If it sounds like the criminal underground, you are only partly right. It is criminal, but it is a long way from underground.
Some horse trainers have found that “criminal” is a tough title to make stick when you take an improperly possessed horse across state lines. Law enforcement officials say this is because these matters are usually considered civil, rather than criminal. As a result, there is no reason to operate dishonestly “underground.”
Laura Hense lost her competition horse, Orion, doing what most horse owners do, trusting her horse trainer. Instead of returning the horse to the stable, her trainer arranged to have the horse shipped across the country to a “connection” without her knowledge. When Hense couldn’t find Orion she initiated a three-year journey to try to get him back.
How your horse can be taken is far less predictable than the people who may attempt to take it. For that reason Rate My Horse PRO (https://horseauthority.co) was created by a group of concerned horse owners and professionals. Rate My Horse PRO, which soft-launched in early November, is an all discipline tool that allows you to add, rate, and review professionals you’ve done business with anonymously. Verified users can rate horse trainers, stables, farriers, and horse shows.
Rate My Horse PRO also offers several unique features new to the online rating world including identity verification. Every user pays a $5 fee for the third-party service to ensure each rating is unique, and to protect the validity of the rating process. The goal of the site is to enhance the horse industry by offering a new level of transparency and accountability while facilitating the promotion of horse professionals who conduct business with integrity. The site is currently collecting information and ratings; all of the site’s ratings will go live at the Rate My Horse PRO Grand Launch in January 2011.
Once the “connection” received Orion, he was almost immediately sold and relocated to a third state. Hense did eventually recover about half of the money from the trainer’s “connection,” and has an outstanding judgment against her former trainer. The former trainer now lives out of state, where he has avoided payment, and successfully operates his business.
Hense would never see Orion again.
Pages: 1 2 3 4 5 6 7 8 9