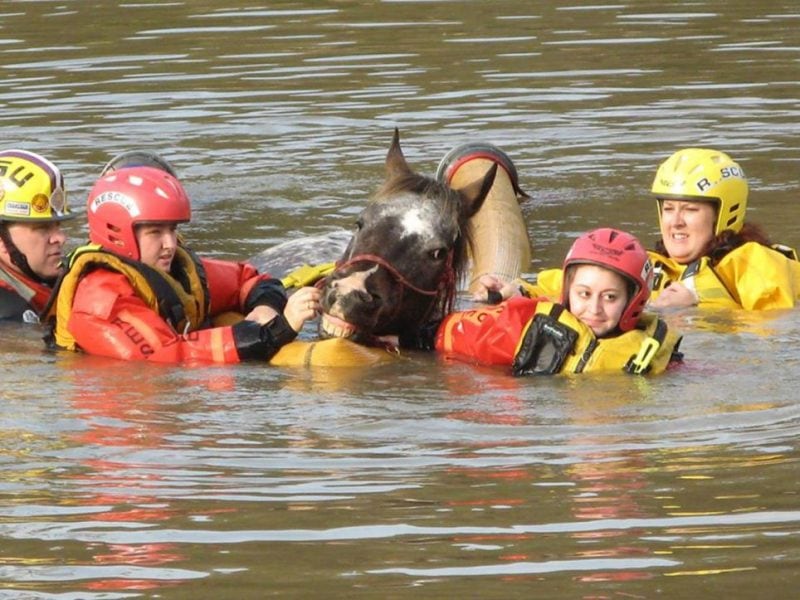 Even as historic water levels paralyze Louisiana more than 500 horses were saved from the flooding that ripped through parishes.

Even as historic water levels paralyze Louisiana, more than 500 horses were saved from the flooding that ripped through parishes.

“The most amazing thing is just seeing the extent that many owners went through to save their horses,” rescue volunteer Melissa Seal told us. Some refused to leave their animals, even risking their lives.

Seal says the community worked together to save as many lives as possible – human and animal. Also helping out, are local large animal veterinarians, some of which lost everything, but are treating injured horses.

The human death toll across 20 parishes has risen to 13. It is estimated the storm ravished 40,000 homes.

Some horses drowned after being tangled in debris. Others panicked and were washed away. Seal said, “the water came up so fast.”

Two of her friends lost a combined 17 horses in Livingston Parish – 12 were miniature horses. They also lost three mules, cows, goats, sheep, pigs, and chickens because they were unable to get the animals out in time.

Many rescued animals are sheltering at the Lamar Dixon Expo Center. Shelters outside the area are beginning to receive small animals to lighten the burden on the local area’s resources.

Volunteers continue their efforts to save and care for horses and other animals. You can help support the Louisiana State Animal Response Team by making a donation here to the organization.

Relief efforts during Katrina changed the way animals are rescued in emergencies due to the passage of the Pets Evacuation and Transportation Standards. By approving it, Congress compelled rescuers to save animals and their humans at the same time.